C++ openFrameworks Magic from The Found Collective in Collaboration with MSA Visuals:

C++ openFrameworks magic from the Found Collective in collaboration with MSA Visuals.

Posted by LINGDUM at 9:02 PM No comments: 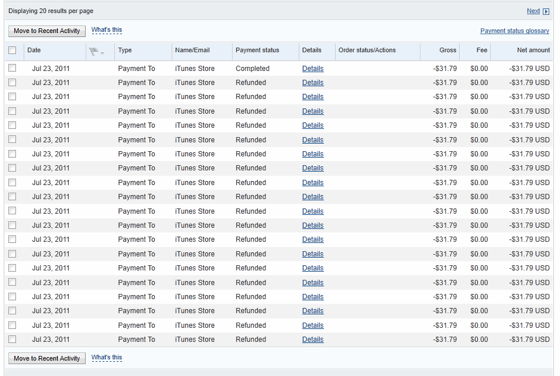 
Clearly Mr. Christman didn't need 122 copies of Lion, and something has gone awry. John got in touch with both PayPal and Apple support, but said both sides pointed fingers at each other. 'Apple Blames PayPal, PayPal blames Apple. They both are claiming to investigate, but I am stuck broke for three days now.'


Christman thinks it is related to the new iCloud feature that allows iTunes to automatically download previous purchases:


I fresh installed Lion, because the upgrade caused a lot of problems. My system needed as fresh start anyway.

I logged into our developer account and got the latest iTunes Beta, and installed it. iTunes has a cool new feature to download all your purchased apps for you.

As each download started it charged me $31.79. Some apps came fast, some took longer, but the timing was directly related to when a new app started to download.

He downloaded 116 apps total, but noted that several apps failed to download and needed to be restarted. 116 apps downloaded and 121 extra charges seems too close to be mere coincidence.


Christman isn't the only person to face these issues surrounding Lion and PayPal. There is a lengthy discussion on Apple's support website about the issue, and other bloggers have run into similar problems.


Even though the purchases above say 'refunded', Christman says he hasn't seen a dime. 'Apple claims there was only one transaction. When I told PayPal to dispute them, they closed the cases and marked the items as refunded on the 23rd. Bear in mind all this money was taken and never returned yet.'


MacRumors reached out to Apple for comment, who said they would work with John directly to try to get his issues resolved.

Posted by LINGDUM at 8:56 PM No comments:


The new F49 FRINGE backpack has been put to the test like no other FREITAG product before it. …to the fringe of sadism! Take a look! Posted by LINGDUM at 9:55 AM No comments: If inventor Chris Malloy has his way, we’ll all get a chance to take to the skies with his Hoverbike Flying Machine.  This motorcycle-inspired flyer uses a pair of caged rotors to create the downward thrust necessary to achieve real flight.  A single pilot hops aboard just as they would a motorcycle, and a twist of the throttle will take the Hoverbike to heights up to 10,000 ft.  While experience flying a helicopter or propeller plane will help, the Hoverbike is to be classified as an “ultralite” in the US, meaning owners will not need a license to fly as currently planned.


Sound like a pipe dream? Note that these pictures aren’t renderings, the Hoverbike is a very real machine.  The Hoverbike is approaching its first untethered test flight, a giant leap forward for individual aviation.  It has been a stable test subject when tethered, and Malloy is raising funds to perform the final tweaks before Hoverbike takes to the skies untethered.
Once the prototype is complete and the Hoverbike is ready for the market, Malloy hopes to begin by selling 100 Hoverbikes per year.  At that rate, they’ll be priced at around $50,000 USD per unit.  Once he can boost production accordingly, he hopes to bring the price down to a rate similar to common motorcycle prices.  Hey, we may still be a ways away from flying cars, but I’ll gladly be pacified with a flying motorcycle.  Check please! Posted by LINGDUM at 9:39 AM No comments:

Sehsucht’s Berlin office crafts a charming lo-fi wonder for O2. Directed by Lucas Zanotto.
Posted by LINGDUM at 9:20 AM No comments:

The Resale Right:reblog from Motionographer

Time and again I have been moved by the sense of solidarity that comes across from various discussions on Motionographer about protecting the rights of designers and artists (i.e., How do we look out for one another?). This is why when I came across this piece, I simply had to share it with you. It is gorgeously arresting in its simplicity, and informative. It’s been a while since I saw typographical-pictorial animation handled so well. So, enjoy!

According to Pierre, “The ADAGP is the French collective rights management society in the field of the visual arts (painting, sculpture, photography, multimedia, etc.). It represents almost 80,000 artists. They asked for a film that explains what the resale right is.”

Full credit list can be found on the Vimeo page.

Posted by LINGDUM at 8:43 AM No comments:

Sleight of Hand with Screens, iPod Magic, and Marco’s Ruminations on the Power of Deception

Sleight of Hand with Screens, iPod Magic, and Marco’s Ruminations on the Power of Deception:re-blog from Create Digital Motion


Techno-wizardry and eye candy aside, make no mistake: as artists, we engage every day the essence of truth and deception. So, while magician Marco Tempest’s hands are fleet, his magician-trained choreography slick, and his coordinated mobile screens impressive, it’s the message behind the medium that’s most poignant. To me, at least, Marco has something to say about the nature of deception, something as much about artifice of humans as about the artifice of screens, that is complex, beautiful, and moving. Image courtesy Marco Tempest.
Naturally, that raises the question: what is this, exactly? Marco tells CDM:

I am not really sure what to call it. It originally started as a magic routine, but very early in the project it seemed like the magic was too distracting from the story. I decided to take the “how did he do that?” out of the equation and make it more of a “magical” piece. I do not want to challenge the audience to figure out how it was done, but rather emotionalize the message with some of the softer devices of my craft.

Magic really has the power to re-enchant us. It’s a wonderful medium to convey a message or a story and technology just happens to be the vehicle I use to get the initial attention.

Marco also encapsulates on video his thoughts on open source magic. That idea itself is a seeming contradiction, given that most people assume magic somehow crumbles when its secrets are revealed. But Marco is to me part of a bright, experimental movement in visual technology and magic alike. The technologists, like the magicians, are finding expressions that hold up to scrutiny, that remain magical even under the harsh spotlight of knowledge.

You can also find the free software by which Marco created the effect, synchronizing multiple screens:

Plus our previous coverage:

And it really is true that Wikipedia – like all human knowledge – leads back to mathematics and philosophy. (Hint: even math is philosophy, not truth. If that isn’t relevant to mixing computation and art, I don’t know what it is.)

Putting the digital in prestidigitation, as always…
Posted by LINGDUM at 9:16 AM No comments:

get control from pixel noizz on Vimeo.


Berlin- and Budapest-based artist pixel noizz sends us “Get Control,” original software that turns tablets into visual instruments, chopping, scratching, and reassembling visuals and sound in live performance. That’s all we know at this point, but the video is already worth a watch – some promising stuff, and likely to be one of many experiments in this area. (In fact, to bring video performance back to the forefront, we’ll need more! Get hacking / practicing!)

Yarn, in Motion: Projection and Virtuality, Crocheted and Electronic, by Olek and Dev Harlan

Yarn, in Motion: Projection and Virtuality, Crocheted and Electronic, by Olek and Dev Harlan:re-blog from Create Digital Motion

Electronic aesthetics have been deeply rooted in live visuals, but that’s even greater reason to explore materiality. Dev Harlan, a New York-based artist working in sculpture, light, and projection, has built a collaboration with the now-legendary Polish-born, New York-crocheting Olek (aka Agata Oleksiak).

Olek’s work has included what might best be described as crochet interventions. Whether in a gallery setting or working with the city streets and objects as her canvas, she wraps people and things in crochet. The work has become a ubiquitous part of life here in New York; on the way down Wall Street yesterday, I was greeted by two performers wrapped in full crochet bodysuits with their hand through a canvas, shaking hands with passersby. (Most of the Wall Street tourists and workers ignored them; I found, on a difficult day, the gesture of shaking their hand to be transformative.)

Dev Harlan faces the tantalizing challenge of translating this fiber virtuality into digital transformations, rather than only crocheted ones. What’s nice about the approach is that Dev’s work combines Olek’s crochet process, captured in stop-motion, with fanciful all-synthetic imagery. Dev’s own penchant for bright colors and patterns is the perfect electronic match to the charged, magically-cheery patterns in Olek’s artwork. A five-minute DVD of “artifacts” from the collaboration is available in a limited run, covered, naturally, in a crocheted sleeve.

Projection mapping, aside from being a practical solution, envelopes objects in much the way Olek’s all-covering crochet installations and suits do. In fact, it seems to me just as appropriate to include here solo work by Dev Harlan: “Star Geode I,” for the New Museum’s Nuit Blanche in May, has much of the same feel to me as the crochet works.

Dev Harlan, "Star Geode I" from Dev Harlan on Vimeo.

"Any Colour You Like" (Pyramid III) from Dev Harlan on Vimeo.


See also wonderful uses of color and pattern in the Pyramid series of the last couple of years, which has been shown in the Christopher Henry Gallery in NYC’s SoHo.

And while it’s not strictly relevant to Create Digital Motion, I find the spirit of Olek’s work to be inspiring, in terms of how it relates to the world. A documentary video is in the works, funded by Kickstarter:

Posted by LINGDUM at 9:03 AM No comments: You’d think a man with a projector on his back would look happier, but… Photo courtesy Brian Blessinger.
Posted by LINGDUM at 8:59 AM No comments: