Posted by LINGDUM at 8:32 AM No comments: Posted by LINGDUM at 9:51 AM No comments:

While we can’t speak for everybody, we were generally underwhelmed by the assemblage of usually impressive commercials to air during Super Bowl XLVI. Unquestionably, game day saw an onslaught of auto spots, and while we’re not here to argue the cool factor of Clint Eastwood selling us a Chrysler or Matthew Broderick dishing out another Ferris Bueller movie, what works for the slick, more agency-driven sites doesn’t always work for Motionographer. That said, we saw one spot(s) that we felt deserved a little love.

In an epic reunion of classic cartoon characters from years gone by, MetLife’s Everyone, created by Psyop and agency CP+B, hold an all-star family reunion of old-school toons. Not since Roger Rabbit have animation fans seen so many of their childhood pals together in one super-nostalgic, simply awesome homecoming. The piece trots back in time to the days of Peanuts, Warner Brothers, Filmation and Hanna-Barbera but stops short of bridging the generational gap with the Nickelodeon, WB, and the Disney Channel era of TV toons. After all, who better than He-Man — 80s hand-drawn muscleman and defender of Eternia — to ensure the financial security of every family, everywhere? And, if you’re inspired to geek out even more, then check out the mini-spots below and watch Voltron do The Robot, Snagglepuss throw a tantrum, directors search for Waldo or Yosemite Sam have a celebrity-style meltdown.

Voltron Doing The Robot Between Takes of MetLife’s “Everyone”

Director Searching For Waldo on the Set of MetLife’s “Everyone”

Yosemite Sam Melts Down on the Set of MetLife’s “Everyone”

Posted by LINGDUM at 9:26 AM No comments:

Posted by LINGDUM at 9:27 AM No comments:


French-born, Bristol UK-based artist Joanie Lermercier is one of the names most associated with projection mapping. But in a new video, the artist – who goes by the name ANTIVJ, which doubles as his audiovisual label – expresses just how he conceives these tricks of perception, as plays of shadow and light.


The work itself is beautifully documented here, interspersed with its surroundings, as an installation and (for Joanie) artist residency at Troy, New York’s EMPAC, not far upstate from New York City.
It’s not just an escape from the rectangle that motivates ANTIVJ’s work. The specific application of calculated (and sometimes exaggerated) illusion, and the awareness of those illusions, recalls the trompe-l’œil technique that saw its peak in Baroque and Roccoco art. And it’s movng to me to hear Joanie speak about the sensation that surrounds that technique; somehow, I’ve always found French artists and perhaps even the French language most articulate in appreciating ephemeral sensations in expression. (I certainly have found that in playing French music, so I at least have that personal connection, if imagined or otherwise.)
It’s beautiful work. And at the same time, I find it encouraging that you could close your eyes, listen to Joanie’s conceptual notions, and create something entirely different. This could well be a deep well of thinking about digital projection, in which three-dimensional illusion is far from novelty. Centuries of art certainly suggest as much – and this new digital work demonstrates that aesthetic can be independent from illusion. Details of the video:

an installation by Joanie Lemercier

a video by Jérome Monnot (cargocollective.com/jeromemonnot) and Vania Jaikin Miyazaki

Music used in the video report:

Projects featured from 1:22 are all documented on antivj.com Inspired by the icelandic volcano, which wreaked travel havoc across europe earlier this year,

Painted directly onto a large wall, a wireframed scenery is slowly revealed by gentle light effects.

The audience’s sense are progressively challenged as optical illusions question their perception of space.

Projection Mapping Onto Turntables from E.N.S. on Vimeo.


Rooted in pre-digital tradition, the turntables and mixer here get a different kind of digital upgrade: sound-responsive visuals transform the decks.
Built by Austin, Texas-based student Mark Morris, artist E.N.S., and collaborators, this work in progress demonstrates what happens if you point the projector directly at the DJ’s rig. Cleverly, they map the platters themselves as they rotate, as well as add interface elements from the DJ software and responsive audio waveforms. From Mark:

This is a projection mapping project we’ve been working on for about a month as of uploading.

It’s a user interface for Serato Scratch Live that is vinyl rotation-reactive, as well as sound-reactive, and makes it possible to mix using Serato without having to look at your computer screen whatsoever. We have real-time waveforms streaming across our mixers, or our vinyl platters, and we have started to incorporate video effects that are controlled by [Nintendo] Wii remotes. We are also working on controlling effects with motion capturing using a camera.

Much more to come!

The Song from the video was made by one of the creators of all the cool stuff you saw in the video: Mark Morris

Music from E.N.S. is available on Facebook.
Thanks to Francis Preve (Academik Records, Keyboard Magazine), who’s fortunate to have Mark as a student and points this our way.
We’ll have more as they get further along, but this is already looking great.
Update – via comments, here’s another instance of projection mapping onto decks, by MrGeeBee, a Luzern, Switzerland-based developer moonlighting as DJ. I wouldn’t be surprised if there are other examples, as well. Heck, I hope there are – go make more, folks.

Posted by LINGDUM at 9:09 AM No comments:

Golden Tiger from le3paris on Vimeo.


Here’s guerrilla projection taken to a whole new level: hitting the pavement, doing it from a moving object. Hit the road, jack.
The result: a digital tiger that appears to “run” across the surfaces of Parisian buildings. A reader tells us:

We have seen a tiger on Vimeo projected and prowling around the streets of Paris.

We found out that the french creative studio Le3 has been terrorizing Paris in recent days with its latest art installation, called the “Golden Tiger.” The team is projecting recorded footages of a running tiger onto the streets of Paris from a moving vehicle. The apparent running speed of the beast is controlled by the speed of car, via sensors in its wheels.

It goes to show that street mapping have clearly moved forward.

Moving forward, indeed. And it makes you wonder what other mobile projection ideas might be lurking in the veldt.
More information:

from an original idea by

with the participation of

Music by THE AGENCY ‘Watching Us’

Published by Industry of Cool

Tiger in your Tank? [Updated] Unfortunately, it seems this work – has already been done. While unintentional coincidence is certainly easy enough in this field, here it appears the work above was without attribution based on an earlier work. Drawing from earlier ideas is a good thing, but doing it directly and without attribution would tend to be plagiarism. I will investigate to see if there’s something we don’t know here.

http://www.gravitytrap.com/artwork/wildlife [by Karolina Sobecka - and really quite lovely work, too - thanks to arctic sunrise in comments and a discussion thread on creative applications]

Posted by LINGDUM at 8:19 AM No comments:

Back to the Start

Posted by LINGDUM at 9:22 AM No comments: 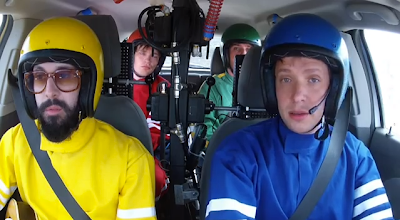 Posted by LINGDUM at 5:26 AM No comments:

These experts are talking about early graphics and motion designs that are available back in 60's-70'. One of the animation generator machine that only 8 of them were build and cost 1 mill was "SCANIMATE" I just love to see the development (evolution) of what we have going on today. Back then just a flash of graphic - machine generate was enough to surprise people and become a talk of the town. How about now? 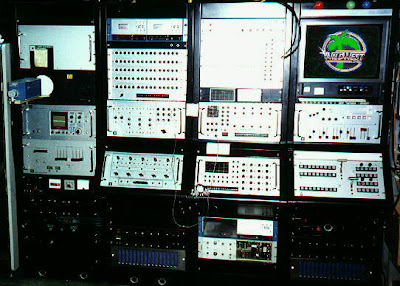 Posted by LINGDUM at 8:47 AM No comments: