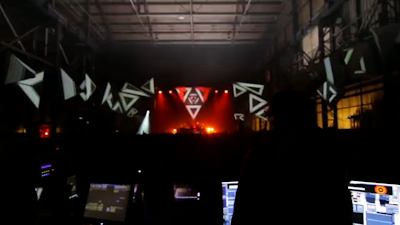 The collective cook up an immersive, triangle filled, mapping extravaganza for Scopitone Festival 2012 in Nantes, France. Extra interesting are the brief screenshots of the planning phases. I also spy an interesting layout of what appears to be a Lemur for iPad layout that possesses a highly ergonomic, function oriented layout. In a brief communication with Orl, he notes that the iPad was used to control the multiple computers that were part of setup:
- 2 Mac Pros

- 12 projectors
Oddly enough, my first impression of this video was that the lighting setup somewhat complimented the structures, given that for the main stage the lamps were considerately positioned at each of the line segments of the triangles. However Orl states that they had little control over and that there was too much light.
Unfortunately this is still a very common problem. I have seen productions that could have been immensely improved by a tasteful and relatively simple balancing and placement of lighting. It always appears to me that lighting is somehow arranged in a sort of battle formation that disregards any kind of overall stage composition. This type of scenario usually emerges when the producers of the event are primarily concerned with getting the job done without much of a fuss.
While the technology at our disposal is getting better, with more integration between video and lighting, such as the upcoming release of MadMapper with its MadLight feature, we will likely always have to set our own standards and convince others in order to achieve our visions.
Posted by LINGDUM at 7:49 PM