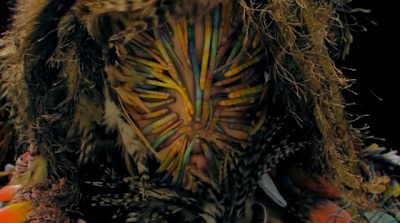 
SOLIPSIST from Andrew Huang on Vimeo.


You loved the trailer. Now you can enjoy it online in full. Winner at Slamdance 2012 of the Special Jury Prize for Experimental Short, Solipsist by Andrew Thomas Huang. For more about the film and balancing personal projects with commercial work, listen to his interview over at Directors Notes.
Hat tip to Short of the Week and Yves Geleyn.

Posted by LINGDUM at 9:21 AM No comments:

Buck delivers with a beautiful piece for the launch of Gud.
Posted on Motionographer
Posted by LINGDUM at 9:13 AM No comments:

Quayola and Memo Akten for the London 2012 Cultural Olympiad

Quayola and Memo Akten for the London 2012 Cultural Olympiad:
Nexus Interactive Arts has worked with Quayola and Memo Akten on Forms for the London 2012 Cultural Olympiad, which is part of the larger countdown to the Olympics. The piece uses archival footage of athletes from the National Media Museum as a seed for a series of abstract animations. An on-site installation also allows visitors to explore the individual layers that comprise each segment.

Check out Oscar Lhermitte’s experiments on vimeo: Seeing in Circles and Revolve.
Posted on Motionographer

Posted by LINGDUM at 8:26 AM No comments:


How do you expose live visual culture to larger audiences? Even as club visuals have become more commonplace, and – evidently – some US$10 million in gear sold last year, the awareness of the medium itself is both limited and, very often, contentious.

Producer and CDM reader Yaniv Fituci sends along one new entry, a show that will look at the meeting place of music and technology. (Hmm… I think I’ve been to that intersection.)

Hosted by G4 celeb Kevin Pereira, the production style definitely isn’t subtle. There appear to be leather-bound ladies around, for one. (If I produced a show in Berlin, leather and bare skin, yes. Ladies – maybe not so much.) And Kevin Pereira seems to be caught in a combination of a motion graphic for Monday Night Football and Lawnmower Man. (“Are you ready for some virtual reality?” Speaking of which, best IMDB tagline ever: “A simple man is turned into a genius through the application of computer science.” Hell, yes!) Can’t someone license the rights to Max Headroom, already?

The format, though, sounds intriguing. The show is done battle-style, judged on Twitter.

And once you get through the title graphics, Mike Relm shows off some video turntablism while doing a pretty nice, concise explanation of the modern live visual set’s evolution. I would have liked to hear some artist names mentioned — Emergency Broadcast Network and Coldcut introduced a lot of the video cut-up and remix techniques you see, and Coldcut the ground-breaking VJAMM software (which itself does get a mention). But it could reach some new audiences, and I’m curious to see how this VJ death match happens.

It’s all definitely focused on club visuals and audiovisual turntable sets, which in a way reveals how big the gulf is between this and the growing practice in generative visuals, projection mapping, and synthesis (even including a resurgence of analog video synthesis).

All of that said, it’s great to see this team take on the topic. More coverage can only be a good thing.

So, if this is a VJ and music tech program for the G4 set, what would you want as Create Digital Motion readers? I think we probably bought ten million dollars in cables last year, at least. (We’ve probably collectively bought $10 mil in those little Apple video dongles, as a community.)

http://entertheplaylist.com/ [Ah, remember those innocent days in the 90s when we all used VJAMM and ArKaos, and there was only one Matrix movie?]

Below, videos with ScreenWerks, Eclectic Method. And Yaniv tells us the next epi will feature controllerism “and bout Ean Golden vs Moldover in a 3-round controllerist battle.”

Bonus: Since my locality is set to Germany, IMDB tells me that, in German, Lawnmower Man is, naturally, “Der Rasenmähermann.” Oh, yes. Now I know what my hardcore deathtronic artist name will be.

Posted by LINGDUM at 7:18 AM No comments:

Posted by LINGDUM at 7:12 AM No comments: