Posted by LINGDUM at 7:30 AM No comments:

VTLZR: live in Rockhal:
Tonight in Luxembourg at Rockhal.

Posted by LINGDUM at 7:45 PM No comments: 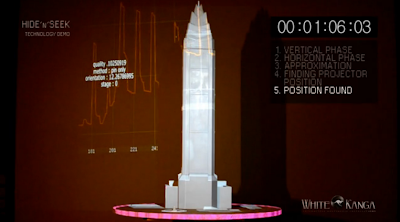 Hide’n'Seek – Technology Demo from White Kanga on Vimeo.
Automatically map an object with a projector. Keep the mapping working as the object moves. And, oh yeah, look damned fine while doing it.
That’s the neat trick Poland-based White Kanga have pulled off, powered by TouchDesigner. We’ve been following their work before:
Robotic Mapping Pulls a Model Building, Tron-Like, Into the Virtual
Projection Mapping, with Robotics, Goes Further to Augmenting Reality: MPS Demo [TouchDesigner]
Here, we get to really see it in action. It doesn’t hurt that you get cool graphics visualizing the calibration. It’s an internal tool, but it demonstrates a lot of what’s possible.
I was in Poland for their national day yesterday, but watching this video makes me want to start waving around the white and red flag and cheering on this crew. (Or, if they like, whatever flag/mascot they choose.) Brilliant work.
Posted by LINGDUM at 5:12 AM No comments:

Following the release of his debut EP “Without Reasons” back in April, Pegase, best known as the lead singer of French band Minitel Rose, returns with his new two-track EP “Dreaming Legend”. Here’s the official video for the beautiful dream pop title track, which you can watch above. The clip was shot in 1976 where we can see the father of Pegase playing a role of an unemployed young man falling into loneliness. The EP is out now on Fvtvr Records. Get it here.
Directed by Paul Jeunet & Alain Goillon.

Edited by Pegase.
Posted by LINGDUM at 7:12 PM No comments:

Para One: “When The Night” (feat. Jaw) Video

Looking for some late night fun? Para One’s new video for the soulful groovy tune “When The Night”, featuring Jaw on vocals, is all about chat lines. Peep the full video above and make sure to check out Logo’s ace remix of the track below. Taken from his album “Passion”, out now on Marble/Because Music.
Directed by Ill Studio.
Posted by LINGDUM at 6:27 AM No comments:

BenZel & Jessie Ware: “If You Love Me”

This track came as a bit of a surprise. South London soul singer Jessie Ware has teamed up with the New York-via-Osaka teenage duo BenZel, comprised of 15-year-old Umi Takahashi and 16-year-old Yoko Watanabe, for a cover of Brownstone’s 1994 R&B hit “If You Love Me”. And it’s so beautiful. This cover comes with a colorful video, directed by Kate Moross, which you can peep above. Also, you can grab the track for free below.
Download here
Posted by LINGDUM at 7:38 AM No comments:

Tame Impala: “Feels Like We Only Go Backwards” Video

Tame Impala: “Feels Like We Only Go Backwards” Video:

“Feels Like We Only Go Backwards”, one of our favorite tracks on Tame Impala’s second album “Lonerism”, gets a trippy video, directed by Joe Pelling & Becky Sloan. “Lonerism” is out now on Modular.
Posted by LINGDUM at 7:36 AM No comments:

Check out the new video for Strip Steve’s “Mega”, a great tune from his debut album “Micro Mega”, out now on Boysnoize Records.
Directed by Theo Pozoga & Loan Calmon.
Posted by LINGDUM at 7:35 AM No comments:

The Augmented City: Istanbul’s Data, Made Visible in Glitchy Structures

Our century is marked by a wash of data, flooding out of explosive urbanization. Humans and numbers, it seems, are now densely packed, dynamic, and essential. Yet with that same density, they threaten to become invisible.
The challenge of visualists: break the barrier to reveal that unseen world. Call it data mapping.
“Augmented Structures” is, first and foremost, rather lovely to look at. It’s a kind of architectural performance, in glitching, flickering contrasts of sound and light. Maybe the scale of transformation requires something aesthetic. Here’s what co-creator Refik Anadol has to say about it – thanks, Refik, for sending in your work.


‘Augmented Structures v2.0′ by Refik Anadol and Alper Derinbogaz is a distilled urban experience project which focuses on two dissimilar regions in istanbul and displays the inner characteristics of the texture of a city-center that has undergone a recent transformation within a suburban region consisting of gated communities. Presented at Istanbul Design Biennial within the ‘Musibet’ exhibition curated by local architect Emre Arolat, the work is based on soundscape and data mapping of two regions reveals the invisible information about their context and suggests an alternative way to understand the existence of urbanization through new media technologies.
By bringing disparate disciplines like sound, architecture and visual arts together, the development re-examines the world in aesthetic terms, in its capacity as an ‘interdisciplinary transformation’. ‘augmented structures series forces each discipline to alter its own ‘material’ state; transforming sound into mathematics, mathematics into architecture and architecture into a living structure, while presenting the viewer with a new media experience that is multi-levelled, produces sound, moves and breathes.’

The project in this case is augmented sculpture, beamed onto a structure. But I wonder how this same data might become part of the tapestry of architecture or urban experience. Perhaps that’s not where it belongs – maybe it’s best kept independent, a mirror in art. Whatever the context, it’s only natural that this substance of our age, data, would become artistic medium, rendered in terms as changing and fluid as it is.
More:

From the same artist, Refik Anadol, here’s an intervention in urban space, with more fluid projections – and, again, a sonic element:

Architecture and (Media) Design are art forms that exist independently from one another. Over the last few years they have been growing together. They are entering into symbiotic dependencies and stimulations. Against the background of the information technologies, architecture has gained a new reality. No longer are objects or processes the constituting elements of a building. Now they are described as technical networks of communicating nodes, which balance themselves in contrived patterns.

“Augmented Structures v1.1 : Acoustic Formations/Istiklal Street” is an augmented structure, an installation by Refik Anadol and Alper Derinboğaz which is created through the use of innovative parametric architecture and audiovisual techniques. The projects deals with a new mediated space: How to translate the logic of media into architecture? In this first experiment field recordings of Istiklal Street will be transformed in to parametric architectural structure. The recordings were made by Kerim Karaoglu who also used these recordings to create an electro-acoustical composition. The project seeks interactions between space, sound, visual and light. A similar connection between architecture and media has been experienced in Philips Pavilion of Le Courbusier in 1958.

Beyond being an artwork this installation is an urban experience. The scale of surface, 2000sqm, and the dominance of the location will definitely take place in collective memory of İstiklal Street visitors.

There will be an exhibition opening on 20th of September at 19:30 in relation to this façade installation which showcases experiments of architecture- sound – visual correlations of Refik Anadol and Alper Derinbogaz.

During the night visual performance will be projected on the structure which will be accompanied with a generatively designed contemporary aesthetic visuals consisting of input data from the recordings and their transformed versions synchronized to the movement of graphics re-shaping and transforming the structure on which they are projected. The structure in turn influences and transforms the projections as well.

An Ethereal Water Projection in Belfast

An Ethereal Water Projection in Belfast: 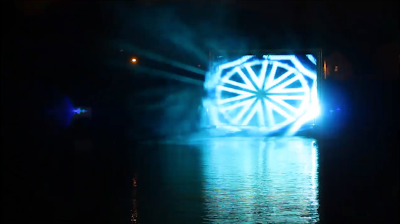 DSNT// Water Projection from DSNT on Vimeo.
Expect some serious brightness to make it work, but water can be an ethereal, otherworldly surface for light, blurring the lines between substance and image.
Oisín O’Brien of DSNT sends this brief but beautiful work from Belfast. DSNT are busy, too, providing both musical content and visual design for this creation.
Oisín shares some technical details with CDM:


The screen of water was created by a series of jets which where mounted on the & floated out into the lake. The jets created a haze which carried the light, to get the amount of light that was needed we used a 12k lumens christie projector.

Posted by LINGDUM at 5:56 AM No comments: